The last post was longer than I thought so I had to make another one dedicated to not only the food there but also other adventures during week 1. One thing to note about Melbourne is that pretty much everything’s expensive and coffee’s kind of a big thing there.

During my trip on campus, I got a Tandoori chicken sandwich along with a chocolate Boost juice for $10, my wallet cried. Here’s photo proof of the disaster.

The next GOOD meal I had was at this Mexican restaurant called Mamasita which had $6 tacos. I did not believe what I was ordering but it was actually so good that the money was worth it, otherwise I would’ve just opted for the 69 cent tacos back home on Sundays. I ordered the shrimp taco while my friend ordered the fish taco. We also got these grilled corns the restaurant’s famous for and it was absolutely scrumptious! But before that, my friend took me to the current number 1 froyo place called Yo-Chi, I had a bit of a sore throat and ate a Lozenge beforehand so my whole mouth was numb and therefore, I could not taste much…

As I have mentioned before, coffee is quite big in Melbourne, not sure about the actual quality of the coffee but Melbourne’s known for its coffee drinkers. My Singaporean friends took me to this unique little cafe down the road from where I live called Seven Seeds. I ordered a latte, the other two ordered a hot chocolate and a cappuccino and then later on, imported black coffee. The latte was absolutely delicious, I really enjoyed it if it wasn’t for its jacked-up price. Other than that, the chocolate looked super yummy too. This cafe’s precious, so I may be coming back for more.

Now both Montreal and Vancouver don’t have ChaTime but Toronto does and just so happens, Melbourne does too! Weird, so I decided to try one because I was craving bubble tea at the time! I got hot oolong milk tea with pearls and although it satisfied my hot drink craving, it was slightly too sweet for my liking!

We had brunch at one of the alleyway restaurants called RMB. My Spanish omelette was pretty amazing but I didn’t get to finish it and sitting out in the cold wasn’t such a great idea either but it was chill. I also ordered green tea to warm myself up!

And finally, our Malaysian friends took us to eat Malaysian food! It was actually my first time eating Malaysian food so I didn’t know what to expect except spicyness, which I thoroughly enjoyed!

We ordered chicken skewers, noodles, and 3 plates of their curry with the famous pastry/bread/I don’t know what it’s called. Besides that, I also ordered this ice tea with lime while others ordered this Malaysian hot chocolate which was basically like Milo.

As mentioned in the previous post, I took a trip to the Queen Victoria Market and looked around to purchase fresh produce. I was actually craving oysters so we got a dozen for lunch for only $12! Now that was a deal! There was a produce section, a seafood section, meat section, cheese section, a food court, and even a clothes section (random!).

Now, being the die-hard KFC lover I am, I decided to get a boxed meal before catching a Monsters University showing during thr week. It was quite strange to see it like this but nonetheless, it was mouth-watering.

And on one windy day when I was intensely craving ramen, I locked down the nearest ramen store and went to get a bowl by myself. Not to my surprise, it did not meet my expectations at all and I actually even found a hair strand in the soup. I asked for another bowl, of course, but I was already halfway through the first one so I was pretty much full halfway through the second one. I am definitely not going back there, heh. 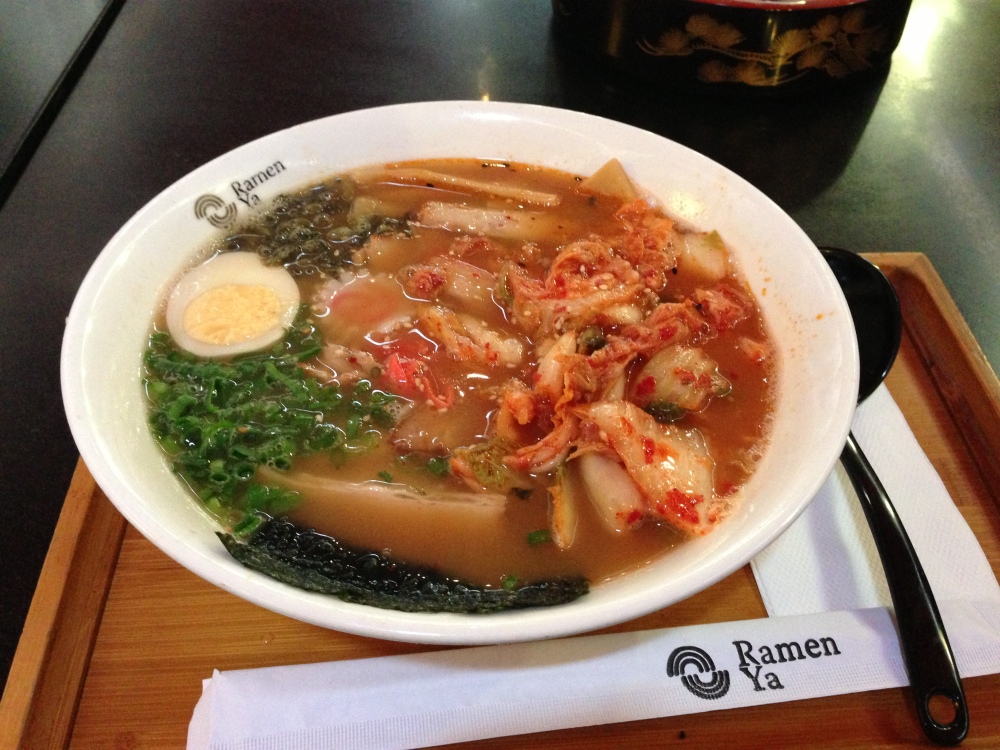 On one Tuesday night, my friend and I decided to track down a cheap gelato place in the Italian district but by the time we got there, it was closed but luckily, the whole street was covered with restaurants so we opted for another one not too far down. I chose the honey + malt with a hot cappuccino while my friend chose hazelnut. The cappuccino was horrible but the gelatos were très délicieux.

So being in Australia, there’s something you gotta try. It’s called Vegemite, it’s this Australian-made yeast thingie that taste super salty and looks like soy sauce paste. My friend bought a jar and forced me to try it with butter on a toast.

And to my surprise, it was NOT BAD AT ALL. I think I could get used to it with the butter but anymore than what’s on there in the picture would make it super salty. You can only put a little bit of it on or else it would be a sodium overload.

So as I have mentioned before, we also went to the Melbourne Museum and guess what, students get in for free! Awesome! I don’t want to talk too much about it because it was like a typical museum with pretty neat displays and history markings but a few things caught my eye: the animal display and the mind & brain display.

Just look at that, everything’s displayed so perfectly and so attractive that if that’s not awesome, I don’t know what is. The photo shown below is a dream display and basically, they show you things that would happen in a dream. It was very interesting and a lot of the displays they have revolving around emotions and the brain is super intriguing.

And as per usual, all of Melbourne’s buildings are pleasingly magnificent.

I actually couldn’t wrap my head around how cool this piranha display is.

And thus ends my first week in an new, exciting city of a different stage in life. Keep close for more! 🙂