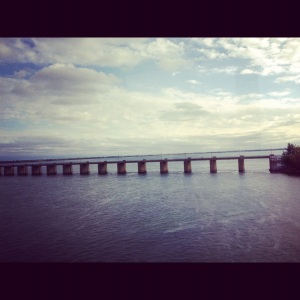 I wish I could pass by this bridge more often, it looks so serene and utterly stunning. The road to was filled with excitement and anxiety, mostly because I had an exam the next day after the trip, but I wasn’t going to let that stop me. I was on a trip to Boston for a Harvard Conference about business, representing McGill of course.

Traversing through Harvard Square at night was simply beautiful. It reminded me why I went to McGill in the first place, to use it as a bridge to explore even more places I’ve never been before. The opportunities McGill provided was endless. I went along with two other students whom I know not the slightest of but through this trip, I grew to be myself around them and casually, we became friends.

The lighting was pretty horrible at night, so these were the only snapshots I managed to capture. The stone walkway really captured my eye for some obscure reason and led me to take an absolutely horrid, blurry photo of it. Oh wells, at least it somewhat captured the essence.

Of course I had to pass by the bookstore and be an extremely enthusiastic tourist who takes home an overpriced mug.

Overall, the conference itself was super eye-opening, may have changed my mind about some things. In any case, it was an extremely fulfilling and great opportunity. Although the time was of the essence for this trip, I met some pretty amazing people that are going to go place.

I have hope in them.

note: Harvard kids are indeed pretty snooty, but if you are lucky, you’ll find ones who are true to themselves.